What makes us resilient?

I’ve been interested in resilience for a long time, for very personal reasons in fact. How do some people manage not to break down in times of crisis but even mature as a result of it? Resilience doesn’t just relate to a crisis, it also relates to the challenges of everyday life, e.g. the pressure to perform, problems with other people, stress or inhibitions.

What does resilience actually mean?

Psychological resilience is defined as one’s ability to successfully adapt to life task or highly adverse conditions. Adversity and stress can be family or relationship problems, health problems, or workplace and financial worries. Resilience is one’s ability to bounce back from a negative experience with “competent functioning. It can be learned and developed by virtually anyone. Resilience is a process, rather than a trait to be had, with gradual discovery of personal and unique abilities.

Resilient people know negative emotions or thoughts, and do not remain optimistic in all situations. By practise, however, they have developed proper coping techniques that allow them to navigate around or through crises. People who demonstrate resilience are people with optimistic attitude and positive emotionality and are able to balance negative emotions with positive ones.”
From: Wikipedia

I personally learn best with examples, so let me give you a story. I’ve got a short story for you which you find below. Using this story, I’m going to explain resilience to you.

That was my father’s story. It contains fictitious elements and true ones, e.g. his imprisonment and its conditions, also the bit with the former British Prime Minister Clement Attlee (maybe this explains my love for England). It’s one of the reasons why I’m interested in resilience. My father’s fate was even harder: he had to start all over again in West Germany without his wife and child.

He lived resilience intuitively, without knowing that there is a word for it.

Optimism
During imprisonment my father knew that he couldn’t keep up with the stronger prisoners, but he was clever. So he ended up helping with the calculation for the heating system, it made his life in prison slightly more bearable.
When he arrived in West Germany later, he had lost everything and had to start all over again. But he believed in himself and step by step he built up a career. His conviction was: “They can take away everything from you but they didn’t manage to break my will.” I want to add: He also managed to retain his morale and dignity.

Acceptance
Once I asked him if he wasn’t filled with bitterness because he had witnessed two dictatorships: First, the war took away his youth, and later imprisoned for part of his life. He didn’t have the chances other people had. I found his answer most impressive: “Prison was my university.” Unconsciously, he mastered the ability of changing perspective. He gave his imprisonment a sense of meaning, significance and later he shared his experience as a contemporary witness. What I admired about my father was this beautiful ability of his to look for possibilities, to move on and not to be filled with bitterness. Quite on the contrary, he was grateful for his life and he felt blessed.

Old age taught him to look better after himself. Falls limited him. He drew his consequences and became more aware, a massive step for my father who’d always been a fast-paced person. Your body clearly shows you your limits, so for your own sake, you’d better listen to your body otherwise you have to live with the consequences. It didn’t come overnight, it meant a process for my dad to get used to it but insight got the better of him.

Solution-focussed
When my father started a new life in West Germany, it was extremely important to him to have his life secured. So he became a civil servant as a consequence. Yet, at the same time he dreamed of travelling, things he had read about during his imprisonment, he now wanted to explore them. Later, after getting used to life in West Germany and his new job he started organising trips to Paris, London, Israel, Egypt, Russia and other countries. He organised the trips completely by himself; he went to the consulships and travel agencies to get the necessary material. It was how one of his passions got started: travelling. His initiative enabled him to afford travelling. He always said: travel broadens the mind.

Self-regulation
My father always made time for himself. He loved reading, he also liked his garden and animals. He enjoyed feeding the birds and watching them in doing so. As much as he liked being out and about, the exchange with other people and his task as a contemporary witness, being at home was extremely important to him. He was also consistent: He changed when it was necessary, even if it meant giving up habits which he had lived with for decades. After falling twice (through no fault of his own) he became more aware and looked better after himself, not easy for someone who was always in a hurry.

As you can see there are redundancies in the circle: Your aging body is something you have to accept (Acceptance) as well as to look after (Self-regulation). After his falls my father looked well after his himself by practicing walking with a walking frame and doing his exercises.
I was with him when the doctor told him, after his second fall, that he would need a wheelchair. I saw the shocked expression on this face. For longer distances he needed one but six months after his fall, when we went to see his sister, he managed to go the 10-minute walk from the hotel to his sister’s house with a walking frame. He was so proud of himself. Regular practicing had helped him.

Looking after yourself, of course, depends on your individual needs: need for rest, for exercises, for help, just to name a few. When you don’t look after yourself, you have no energy for any changes. Don’t wait, till you have reached your limits. Listen to your body instead, to your inner needs and follow them; step by step.

Personal responsibility
My father never saw himself as a victim. He was a doer, looking for fulfilling tasks to accomplish. He loved his job. Then he retired – what next? He got into contact with important people, over years he built up interesting contacts, with a lot of patience. Later he travelled Germany as a contemporary witness together with pupils, apprentices and soldiers. He took them to Berlin where they met politicians to discuss politics. My father kept saying: “The ones who fall asleep in democracy will wake up in dictatorship.” Having experienced World War II and another dictatorship he found it extremely important to share his experience with others and to fight for democracy. His task as a contemporary witness was a matter very close to his heart.

Taking up personal responsibility means that one is forgiving. I once asked him if he wasn’t bitter towards the Russians who had imprisoned him. He answered: “They could take away everything from me but not my free will.” Besides, my father kept mentioning that the Russians suffered a lot from the Germans during the war. He highly appreciated that they were friendly towards the Germans despite their suffering.

Relationships
My father met special people during his imprisonment. They became friendly and stayed in contact throughout their lives. Later, when he was active as a contemporary witness he built up a network of friends and acquaintances. He enjoyed being on his own but he found the exchange of thoughts on politics and history with liked-minded people profoundly enriching. Equally enriching was the encounter with young people and soldiers for him. He found so much pleasure in working with them: sharing his experience, getting them in touch with politicians, experiencing politics and thereby showing them how important it is that everybody contributes for the benefit of our society, according to their individual ability. That was a matter very close to his heart. The thank-you letters he received from participants meant of lot to him.
His family was also really important to him. He loved his grandchildren and enjoyed a lot when we all went on holiday together.

Shaping the future
Visions & values: They affected my father’s life. He always had a vision of where to go; I guess he himself wouldn’t have referred to it as visions. He was also influenced by people whom he really admired, e.g. our former Chancellor Helmut Schmidt. And my father had values: He donated a lot of money, especially to children in poorer regions.

Capacity to improvise
My father never stopped being curious, no matter how old he was as well as being open and eager to learn. If someone had good and solid arguments, he would reconsider his opinion.
Organising trips to other countries at his former job showed that he was pretty good at improvising. He had the ability of making things up as he went. He always looked for viable solutions, that was a real thread running through his life.

A few notes:
This all might sound too good to be true. Let me tell you not everything was easy-going. A friend of my father’s once said to my mum that in the beginning, when they met in Frankfurt, that my father never laughed (this quite changed, we had lots of fun together). And my father wasn’t perfect: When you’re in war and later in prison, you switch to a survival mode. And that’s something you don’t take off easily, and let me tell you it doesn’t make life always easy.

This brings me back to what I mentioned at the beginning: Also resilient people experience bad times and have to find coping strategies. The beauty lies in the fact that resilience is something you can learn.

That was an extract from the resilience model by Ella Amann. Her model is a meta model, it means that it’s a complex model and there are four more levels which play a crucial role, e.g. my mindset. It’s necessary that I really want to make a change, it’s nothing you do half-heartedly, quite the contrary, you really have to be in it, with your whole heart. A powerful motivator is to identify your emotional connection with it. Resilience is something you can learn. It’s nothing you learn overnight, it takes time and it needs practicing but it’s definitely worth it.

A note on the resilience factor “self-regulation”: Our inner critic can be really painful at times. That’s not how we would treat others. There will always be days when nothing seems to be working, we aren’t the least bit resilient and we simply don’t manage. That’s the way it is, we can’t help it and sometimes we need a negative experience to make changes. In the beginning it might take time to get out of this loop but when you practice resilience it will become easier gradually. Treat yourself like your best friend: respectfully, sympathetically, be supportive and, if necessary, give yourself a pep talk but most importantly be loving towards yourself.

And if you don’t manage on your own: I’m happy to help.
I also offer coaching training courses for companies.

By the way, faith can be a most powerful resilience factor, it certainly is for me. 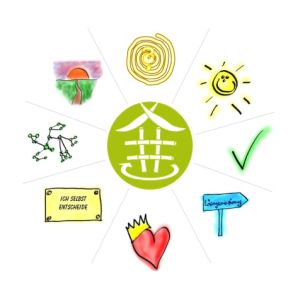 – (Resilience) Coaching can be provided in my office, in companies or over the telephone; I also offer corporate resilience training courses, in Germany (about 22 km north of Frankfurt), the UK and Ireland –