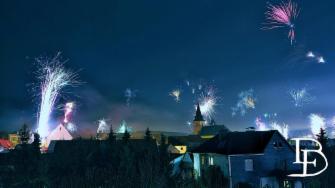 A Wonderful Encounter by Bettina Bonkas

“Mum, look! A squirrel.” Ada pointed excitedly at a brown little something which was watching her attentively.

“Yes, I can see it. If you stand still, you can watch it for a while.” While answering her daughter, Mel was thinking of work and reading a message on her mobile phone.

So, in the end it was Ada who was standing still while Mel ran into a man. The elderly man looked at her in a friendly way, then he grabbed her gently by her upper arms, straightened her up and held her tight for a moment.

“Our inner stance shows in our posture. I took the liberty of straightening you a bit. A Happy New Year to both of you.” With a friendly smile on his face he went away.

“That was actually quite intrusive,” Mel thought to herself but then it felt really good, somehow supported in a very nice way. She found herself smiling.

It was only the next day when Mel fell into her usual stress pattern. She was having a conversation with her boss.

“Mel, we have to do something for the employees. We have too many cases of illnesses, burnout is on the increase. I would like you to organise a resilience training course for the employees so that they learn to better cope with the increasing pressure and become more resilient.”

“Peggy, I fully understand that we have to do something but the way you’re putting it, it sounds like that we don’t do it for the employees themselves but only for the company so that they’re becoming more resilient and thus more productive.”

“Of course it’s about productivity, Mel. Don’t be naïve. We are a company and we have to make money. Besides, the employees also profit in their private lives when they change: Resilience helps you in all areas of life. By the way, I’ve already chosen a training course provider. Could you contact them please and organise the courses?”

“You’ve already chosen someone? Normally, we talk about it in the run-up to the training course, I choose someone and check it with you.” The corners of her mouth were drooping.

“Don’t be nit-picking, Mel. I had to make a quick decision. You will see, the provider is a good one. Only within a day do they convey the techniques of resilience. Here are the documents. If you have any questions, you can ask me later, I’ll be in a meeting soon.” She gave Mel the documents and left the room.

Mel wasn’t only hurt, she was also cheesed off. She wouldn’t be surprised if it was the kind of provider who trained a couple of techniques without really reaching out to the people. And now she had to organise it and sell it as a goody to her colleagues. Mel was frustrated. She balled her hands into fists and stared at her laptop.

The next weeks went on like this. Mel found it embarrassing to admit to herself that she was looking forward to February when Ada would go to Marc. Marc, the love of her life, the love that wasn’t meant to be.

Mel couldn’t think of a better father for Ada and whenever it was possible, she took her to him. The thing was just that he was now living in Berlin, 557 km away. Mel loved her little angel to bits and she knew already that she would miss her. Yet, at the same time, she was happy about having some time for herself, and some peace and quiet.

With Ada being away, she met friends whom she hadn’t seen for a while. They went shopping together or went to eat out and the great thing was that Mel didn’t have to watch the time, she could just enjoy herself. On Saturday evening she went to an event organised by the church: Readings from the bible together with choral singing. It was amazing and Mel was lost in thoughts. It was the last reading when she looked up and saw him: the man into whom she’d run into and who had straightened her in such a pleasant way, in a literal and in a figurative sense. She was waiting for him by the exit.

“You probably won’t remember me”.

“Yes, I do.” He smiled at her, again this kind-hearted smile of his.

Mel hesitated, then she said spontaneously: “Our first short encounter did me really good. Unfortunately, only for a short time, though.” She smiled.

“Yes, we always have to remind ourselves to straighten up, both with our mind and our body.”

Mel noticed how she automatically straightened her posture and broadened her shoulders. “There’s something very positive about you. Are you a priest?”

“Well, I’d thought so because there’s something so kind-hearted and friendly about you and now I met you here again, at church.”

“Thank you very much, my dear. What a wonderful compliment. I was a head of HR, I obviously had a lot to do with people: nice things and not so pleasant ones. You should take an interest in people in that position.”

Many more conversations were to follow and Mel learned a lot from Helmut Kreutzer. She was impressed by his “inner peace of mind” with which he kept a healthy distance to society’s mainstream. He took her the way she was which did her so good: He didn’t try to change her, to become more laid-back and relaxed. He rather talked of transformation, not change.

“Today’s expectations, to permanently change and bring oneself to perfection cause unnecessary pressure in my eyes. It suggests that one isn’t good enough the way one is that one isn’t the person one should be, according to one’s nature. I now give management training courses. It is very important to me that people can be the way they are in my courses.”

Like children, we learn from role-models. Children have a keen sense if someone is authentic and really lives what they say. Helmut Kreutzer was such a man: He lived what he said. She learned a lot from him, consciously and subconsciously.

Mel was enjoying a beautiful winter day in the park together with Ada. The sun shone from a bright blue sky, the frost glittered on the trees and the birds picked from hung up fat balls. Mel was taking a photo of Ada who was playing when a young woman ran into her. The woman seemed stressed. Mel looked at her in a friendly way, then she grabbed her gently by her upper arms, straightened her up and held her tight for a moment.

“Our inner stance shows in our posture. I took the liberty of straightening you a bit. A Happy New Year you.” With a friendly smile on her face, Mel went away.

(Resilience) Coaching can be provided in my office, in companies or over the telephone; I also offer corporate resilience training courses, in Germany (about 22 km north of Frankfurt), the UK and Ireland