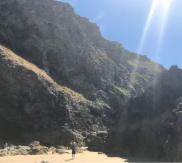 I enjoy reading the magazine „Psychologies“ (https://www.psychologies.co.uk/). It is, how it calls itself, „a mindful living magazine“ and it is very much so. I take away a lot from reading it. In the July issue I read a powerful sentence by Danielle Waterman, England’s longest-serving international women’s rugby player: „Being open-minded and tolerant are important values for me: you never know what’s happening in someone’s life. It’s unfair to judge when you don’t know the full story.“

She’s so right. And I would add: „It’s also unfair to judge yourself when you don’t know your own full story.“ We’re often the worst critics of ourselves and make our lives miserable by judging ourselves. But do we know our own full story? Other people can trigger something inside us we’re often not aware of. It might provoke negative feelings like fear or shame and often we’re left with a mess of feelings. At other time we block ourselves with limiting beliefs. They can leave us with a feeling of insufficiency.

So, when you have a feeling of pain don’t look away but explore it. When you understand your full story, you’ll be a lot less judgmental of yourself, and hopefully stop it altogether. How can you explore your own story? Begin by asking yourself these questions:
– What exactly upsets me?
– What’s so bad about it?
– What’s the most upsetting part of that?

Don’t see hurt feelings caused by others as a problem but as a chance. Let me give you an example: Your friend keeps coming late when you meet. You might find out that it’s not so much about your friend being always late but rather about the feeling that she gives you: She doesn’t take me seriously. Not being taken seriously dates back to your childhood when your older siblings never took you seriously and also your parents always asked them for advice and in fact still do, as it feels to you. And so you find out that it’s not about being late but about taking you seriously. Talk openly to your friend about your feelings and you’ll probably find out that she never meant to hurt you by being late. Instead she has a problem with time management and quite on the contrary she feels really sorry for hurting you. If you don’t explore your feelings and thus your own story you might have an argument with your friend who, on the other hand, feels ashamed of her time management but doesn’t want to show it. So, you might even fall out over something which, with some knowledge, could have been mended. It takes courage to explore your feelings and to be open about them but it’s worth it.

So, the next time when you feel judgmental, think of the fact that there’s always a story behind it. Explore yours. And never forget: Others have their own stories, too.